A basic, high-performance magnetic level indicator suitable for a wide range of process conditions. Atlas is the perfect choice if you’re looking for a reliable visual indication solution without necessarily requiring an accompanying continuous level transmitter. It can, however, be coupled with several transmitter and switch options to expand its overall capability. 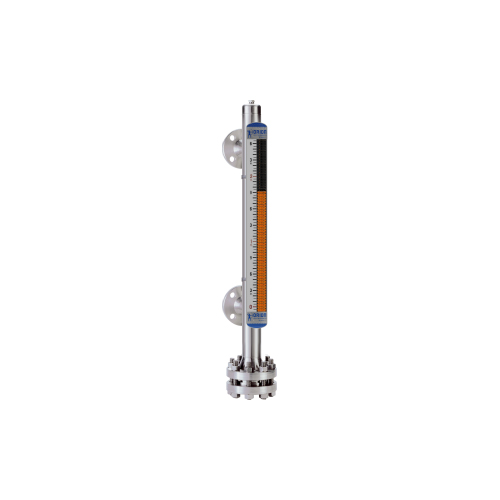 The Atlas is Orion’s standard, high performance magnetic level indicator. Atlas is a single chamber design with either 2″, 2.5″, or 3″ chamber diameter, as required by the application. There are twelve basic configuration styles, including top mount models. Atlas magnetic level indicators are produced in a wide range of materials of construction, including plastics. Orion also offers one of the most complete selections of process connection types and sizes in the industry.
Atlas may be equipped with a variety of level transmitters and switches, as well as, flag and shuttle indicators with or without stainless steel scales. This enables the Atlas to be a complete level and monitoring control.

A change of level in the process tank corresponds to a similar change within the Atlas chamber. In response to the level movement, the Atlas float moves accordingly, actuating the flags or shuttle for visual indication.

The appeal of magnetic level indicators is total isolation of the process within a sealed piping column. Elimination of leaking seals, clouded glasses, broken glass tubing, plus easy access cleaning and adaptation to a variety of mounting styles and process connections. Availability of switches and transmitters adds to their desirability by providing a much less expensive system than a buildup of sight glasses, alarm switches and transmitters, all separately piped to the vessel.

Within the Atlas piping column is a float containing an internal group of magnets. A rise or fall of the fluid in the process tank corresponds to a similar change within the piping column. In response to the level movement the float moves up or down accordingly.

Clamped to the piping column in total isolation from the process liquid is a visual indicator housing. It contains the choice of indicator, either a series of flags or a follower.

The individual flags or the follower contain an alignment magnet which couples with the float magnets as the float moves up or down within the piping column. Float movement rotates the flags and changes their color, or in the case of the follower moves the follower to the point of level.

The position of the follower, or point at which the flags change color, represents true level. Level is indicated or “read” by the corresponding point on the measuring scale.